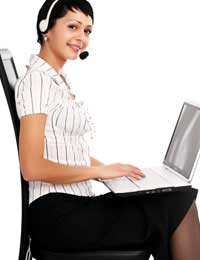 Gestures and body language, formal sign language, writing and a variety of communication aids are often employed as means of augmentative and/or alternative communication.

Gestures and body language are typically means of augmentative communication in that they are used in tandem with some verbal speech to get a message across. For example, pointing to objects, giving the “thumbs up”, winking, crossing the arms, and shaking or nodding the head are all means of conveying a message without speaking.

Unfortunately, gestures and body language are not universal, nor are they standardised. What is meant by a specific gesture may differ from person to person or culture to culture. Individuals who will be communicating often with someone who relies on gestures or body language to augment their verbal speech should take care to learn what each gesture or action means.

Writing out messages by hand, or typing them via typewriter or computer, is another method of communicating that can both augment or replace verbal speech. In order for individuals to rely on this type of communication, however, the small muscles of the hands must be strong enough, and coordinated enough, to make writing a viable option.

A variety of communication aids exist to both augment and replace verbal speech as needed. Communication software, voice amplifiers, switches, and mounting/holding devices can all be used as augmentative and/alternative means of communication. Word/symbol boards are another means of supporting or replacing verbal speech. These boards allow individuals to point to items or words that they wish to communicate. Some software, such as Boardmaker, allows individuals to add to their boards as desired.

If augmentative and/or alternative communication is needed, a speech therapist will be involved in devising the best plan for the individual involved. Speech therapists can be accessed by a referral from a GP, Health Visitor or privately. A variety of organisations dedicated to supporting individuals affected by speech difficulties and disorders will also likely be able to offer further information on augmentative and alternative communication.

The British Stammering Association (www.stammering.org), Christopher Place, The Speech, Language and Hearing Centre (www.speech-lang.org.uk) Speakability (www.speakability.org.uk) and Talking Point (www.talkingpoint.org.uk) are a few such organisations in the United Kingdom.