Home > At Home Activities > Using Board Games to Encourage Speech

Using Board Games to Encourage Speech 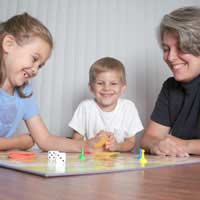 Board games are a classic type of family entertainment, and the fun they bring can be an important part of helping those in speech therapy enjoy their time and look forward to their home practice. Encouraging speech through board games is often particularly effective with children given that they are already exploring the world through their play and allowing them to explore their speech through play helps to put it in the same context. Board games can be used to target sounds, for language comprehension, to practice vocabulary and reward good work during speech therapy and practice.

Articulation, or the ability to pronounce certain sounds and words, is often the difficulty which brings many people to speech therapy and a home practice. Board games provide a wonderful opportunity to target specific sounds in a fun way and natural context. Those who play can make a point of focusing on one sound per game, for example the “f” sound each time the phrase “Go Fish!” is shouted during the card game, or simply incorporate each target sound into the conversation of a given game. This can be particularly easy with games such as Snakes and Ladders which require some trouble sounds (“s” and “l”) right in their title and overriding movements on the board.

Language comprehension is practiced in a variety of ways while playing board games, and because such games require a verbal component it allows individuals to incorporate speech practice. Those who play board games can:

Board games require players to use vocabulary specific to the game. For example, players may say “ladder” (Snakes and Ladders), “property” (Monopoly) or “Yahtzee” (Yahtzee) far more often during a board game than would be natural in real life. Board games which use dice, money or points also allow players to practice saying numbers much more frequently than might otherwise enter a general conversation. Finally, board games which require players to create questions or hold information in their memory will stimulate vocabulary practice as players mull over pertinent information (clues from “Cluedo”, descriptions from “Guess Who”, etc). If players are allowed to keep secret notes then writing and spelling skills can be practiced as well.

Board games can also be useful to encourage speech when they are used to reward good work. Some individuals may decide to use board games as the ultimate prize for a successful at home practice session, while others may decide to practice during a game. In this way taking a turn of the game becomes the reward for each speech practice item completed. If there are not enough people at home to play a favourite board game then finding an electronic version for the computer, video game console, smart phone or on the Internet can also allow players to engage whenever it best suits their schedules.

Using board games to encourage speech is a fun addition to any home practice. Board games can help players target sounds, with language comprehension, practice vocabulary and act as a entertaining reward for all of their hard work.

Using the Internet in Speech Practice

Including Siblings in Speech Practice

Questionnaire: Do You Encourage Speech at Home?

Encouraging Speech Through Charades
Share Your Story, Join the Discussion or Seek Advice..
As speech increases, games like Articulate are excellent for helping create concise, accurate descriptions in a fun atmosphere. If played within the family there's no sense of extreme competition and if played regularly can have a good impact on speech development. This is one example and there are other games that can work just a well. Be sure to choose one where being the first to say something isn't important.
Eliza - 11-Jun-12 @ 2:01 PM
Title:
(never shown)
Firstname:
(never shown)
Surname:
(never shown)
Email:
(never shown)
Nickname:
(shown)
Comment:
Validate: