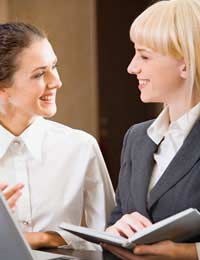 While it’s not necessarily the case that stress causes speech difficulties, existing difficulties can certainly be exacerbated by an increase in stress. For example, those who stutter may find that the problem becomes worse when they are nervous about speaking in front of a crowd.

To avoid such a situation, it is important that those who suffer from speech difficulties remain focused and relaxed in the face of stressful situations. Taking time alone, listening to soothing music, chatting with good friends and even leaving the location entirely by taking a walk or indulging in a bath can all be means by which stress levels are lowered.

Explain the Situation to Others

Speech difficulties make communication difficult and strangers may find this confusing or frustrating to the point that they become impatient. If possible, those who suffer from speech difficulties should consider explaining their particular situation to those they will be spending time with, such as new classmates or co-workers.

If a long explanation is impossible, handouts about the difficulty may help or having someone (a parent or sibling, for example) speak instead could be another option. At no time should the explanation apologise for the difficulty, but simply explain what it is and what it means for social interactions.

Look After the Voice

Even those committed to utterly healthy lifestyles often forget to look after their voices. For individuals with speech difficulties, doing just that is doubly important. Drinking the recommended eight glasses of water each day, avoiding cigarette smoke, using a humidifier in dry rooms and avoiding spicy foods are all easy ways to help any voice sound its best. Limiting caffeine, following a healthy diet and getting plenty of exercise will also help look after the voice, as will getting enough rest, avoiding yelling and screaming and using musical voice warm-ups as needed.

Any warning signs of a damaged voice, such as a sore throat or scratchy throat, hoarse voice or even a loss of the voice should all be taken seriously. If any of these signs occur, a trip to the GP may be advisable and a commitment to a healthier lifestyle should be made.

Speech and language therapists exist to help those with communication difficulties, and can be accessed either directly or via a referral to the NHS. These therapists will help design a specific programme to address existing speech difficulties, usually via consistent therapy sessions.

Stress Relief and Speech Disorders
Share Your Story, Join the Discussion or Seek Advice..
I was born with Childhood Apraxia of Speech. Or verbal dyspraxia. I understand that it will never go away. However, I have been negatively seen by others since I was little. I never really had any friends in school. Every moment of a social situation is awkward for me. My small group of friends left me because I was too “weird” and “unpopular.” So the only real friends I’ve had was online. It’s like I have two different personalities. One in real life, and one online. The personality I have online is the one what I want in real life. But for some reason, I feel more comfortable calling online friends than actually speaking in real life. I have been called “deformed” and I have been made to feel less than human. And it’s not just the kids bullying me, but adults too. Because of this disorder, I’ve had depression and anxiety from an early age. I really don’t know how I will live with this. I can’t even speak up in a public place. Maybe someone will have to speak for me? I don’t know. Whenever I am misunderstood, I try to repeat myself. And when that doesn’t work, then I get really silent and quietly sob to myself. My goal online is to show everyone that you can do anything you desire, even with a disability. On YouTube, I speak in my videos the best I can. I mean, will people probably click off because they can’t understand me? Maybe. However, in the end, I want to get my story out there to those who don’t know what it feels to not be able to talk on demand. It’s a lot harder than you think. - Madz
Madz - 19-Jul-20 @ 5:20 AM
I had a lisp as a child. I recieved Speech Theropy in grade school. That was when there was enough money given to schools for this very important treatment. I still am self consious about some sounds, like sh, ch, J, H. Those are different than lisps. I learned to hold my tongue down and push against my lower teeth to make an s sound. I learned this later in life from my dentist, he told me there was a device that could be worn to stop my tongue from going to the top of my mouth. But it was quite expensive, instead I simply taught myself to push on my lower teeth. Thank you Dr. Dentist. I never found a way to correct the other sounds I mentioned. Some rude people will make fun but I pay no attention and keep on talking a mile a minute. Self taught over many years of embarrasment, when you see a normal person on tv that has a speech problem like Mayor Gulliani, it's helps you know your not alone. I noticed most film, movie, and tv stars dont have this problem. How sad the business is most likely dismissing very talented people with lisps. Their loss.
none - 25-Jul-12 @ 10:47 PM
Title:
(never shown)
Firstname:
(never shown)
Surname:
(never shown)
Email:
(never shown)
Nickname:
(shown)
Comment:
Validate: