Home > Everyday Life > The Use of Cued Speech 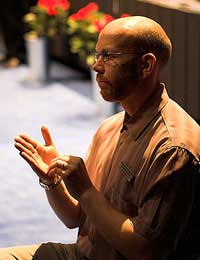 Cued speech is a method of communication for the deaf and hearing impaired which uses different handshapes and different locations near the mouth to supplement traditional lipreading (sometimes also known as speechreading).  It is not a system of sign language, but rather is based on phonemes or speech sounds. The shape and locations of the hands help, when read in conjunction with the movement of the lips during articulation, to differentiate the sounds being made and therefore the words being said. It has been estimated that lipreading only communicates about 30% of what is being said, but using cued speech as well increases this to up to 95%.

The most basic goal of cued speech is to make different speech sounds distinct to someone who is lipreading. It does this by using eight different handshapes to represent consonant speech sounds and four different locations of the hands near the mouth to represent vowel sounds. A handshape and a location used together represent a syllable. These differentiations are important because in traditional lipreading it can be hard to distinguish similar sounds, such as those made by “b” and “p”, so adding a handshape and/or location can allow a user of cued speech to make these subtle distinctions and more accurately follow what has been said.

Cued Speech and Other Systems of Communication

Cued speech is used in conjunction with lipreading, but most deaf and hearing impaired cued speech users are also able to communicate using other systems as well. Most cuers can also speak and sign, so they can be flexible in how they communicate with many different people in many different ways even if they are all a part of the same conversation.

Cued speech promotes language fluency in hearing, speech, lipreading and reading. Cued speech promotes fluency in hearing by clarifying distorted or incomplete sounds. It promotes fluency in speech by drawing attention to the mouth and articulation movements, as well as reinforcing speech sounds, particularly within a word or phrase. Fluency in lipreading is promoted through clarifying only particular sounds rather than signing full words and conversation, and reading is promoted by focusing on the speech sounds that make up all words.

There are a variety of cued speech charts, videos and tuition sheets can be found online, though working with a qualified cued speech teacher is recommended to enhance any sort of e-learning. The Cued Speech Association UK offers a variety of workshops, courses and even a residential summer school for learning to cue. You can also discuss learning cued speech with your GP, audiologist or speech therapist for more information.

Cued speech is a system of clarifying speech sounds for those who lipread. Handshapes and the location of the hands help to differentiate consonant and vowel sounds, and the use of cued speech can promote language fluency in a variety of other ways as well. Learning to cue is best done with a qualified teacher and there are a variety of workshops and courses which can teach cued speech to the deaf and hearing impaired as well as their friends and family members.